Hi! Sorry it’s been so long for an update… Since my cruel April Fool’s joke that so many of you (didn’t) appreciate… we’ve been here in the adoption process (skip now if you don’t want the details, no offense taken- I can hardly read it myself):

Parquet Court
The ‘step’ we refer to as Parquet court is actually a very complex series of steps and processes involving multiple offices and repeated trips between them.

We got word last week or the week before that we are done here (yay!) and moving on to here (skip again if so inclined):

Ministry of the Interior
All international adoption cases are reviewed by the Ministry of Interior. In order to obtain authorization to request a passport, the following documents must be submitted for each child:

The Ministry of Interior will then grant authorization to submit the dossier to Haitian Immigrations for a passport.

The real exciting news of the day is that our dear friends, Keith and Michlyn, made an appearance in court today before a judge who then, after a long, emotional time of questioning, granted them formal guardians for Kenlove!  You ask, “why this is so exciting for you, Ann?”  It’s a long story- but, in a nutshell (or not)- Michlyn was a college roommate of mine, Keith was a good friend of my big brother’s growing up in Stillwater with us…they met at Bethel…got married right after…they moved to Oakdale and began attending our little church at the invitation of Dick and Viv… Scott and I moved back to Oakdale once we had Cali… we joined a small group with Keith and Michlyn and a few other great couples that stayed in tact for 10+ years… Michlyn traveled to Haiti last June with their son, Trey (who is Cali’s age)- I was so happy that my friend was going to experience the country where our son, Davensly, is from!… they then hosted a couple boys from a Haitian soccer team at their home later last summer… THEN they had it on their hearts to see about bringing Kenlove here on a student visa as he is an orphan from Cite Soleil (VERY tough area of Port-au-Prince) and was living with his sister and her kids and had never had the chance to attend school… through many not small miracles, he came here at the end of November and they have since been trying to find a way to allow him to stay with their family.  Through much investigating, talking with lawyers who deal with Immigration processes, and prayer- they were led to try and secure a special Immigrant Juvenile Status for him- this will be easier to obtain now that they have been granted guardianship!  Once he gets through Immigration, he will be able to get his green card and stay in the U.S. legally and permanently if he desires!

This just leads me to think back, with a very full heart, on the early days that Michlyn and I were home with our little kids and the times we spent praying for our families and our futures… WHO KNEW?!  I stand amazed and in awe.  Vinny will have his own little Haitian village around him- with Stanley, and now a big brother in Kenlove (he is Cali and Trey’s age), and friends up north in JP and Eli Schlecht (Sara’s nephews who will also be on our trip in June)… and who knows how this village might grow in yet another year!

Here is Keith, Kenlove (Kenny as his brothers call him), and Michlyn 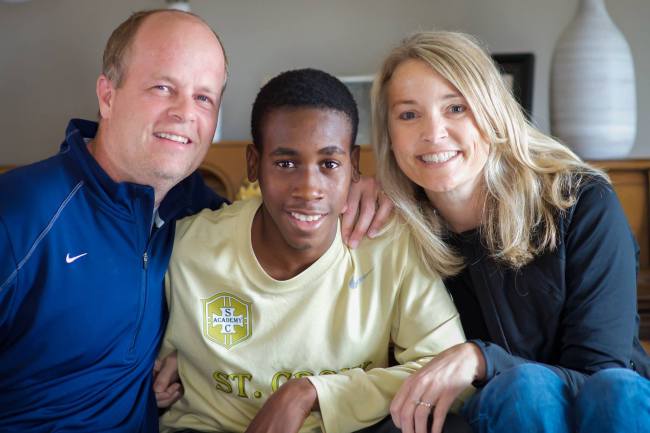