Haitians around the globe today were crushed when their favorite team, Brazil, was pummeled and humiliated by Germany in the semi-finals of the World Cup.  Even the Coke bottles sold on the island reveal their affection for this team. HAHA.

Life comes to a halt in Haiti during any WC game- but, especially when Brazil is playing.  People flood to neighbors, shops, businesses, etc. to watch or listen to the game on any old t.v. or radio they can find. Many of those being powered by generators, and the generator gas is bought with the donation of the spectator’s goudes (Haitian money). Game time is party time- and party time is something to look forward to here. We witnessed lots of large groups of fans crammed around shacks and tents trying to catch a glimpse. Our van driver had the games on the radio as we traveled around. Not that I could understand it. It was really fun to be there during the Cup. EVERYONE gets into it. Brazil flags are plastered everywhere. If you want to find an easy topic of conversation, ask any Haitian about the World Cup, soccer, or Brazil’s team! I was a little surprised to find even myself feeling disappointed when Scott told me they were losing 5-0 30 min into the game (I love that he had it on in his office today while “working”)! If a recent soccer fan such as myself could feel bummed, I can only imagine the real grief being felt tonight by Brazilians and Haitians alike.  Scott said the cameras kept showing fans who were just openly weeping. Soccer is so beloved by most countries outside the U.S. and it’s been fun to watch it gain more attention at home over the past month…at least for me, being the sports enthusiast that I am 🙂  Doesn’t hurt that our boy, Vinny, is very passionate about this game, too!

Now, that Brazil is out…I think most Haitians- well, the ones who have come to terms with the fact that Brazil lost (our friend, JP Schlecht is in denial)- will turn their affections to Argentina. Including me.  You see, our boy likes Argentina’s star forward, Messi.  So, I do, too.  And, so should you.  The day we went shopping at the street market, Vinny and I walked up and down the entire street (about 2 blocks) filled with tents of merchandise. He was looking everything over quickly and diligently and kept shaking his head no- he wasn’t seeing anything he liked.  I think he was looking for a spiderman toy or a soccer ball. No such luck. 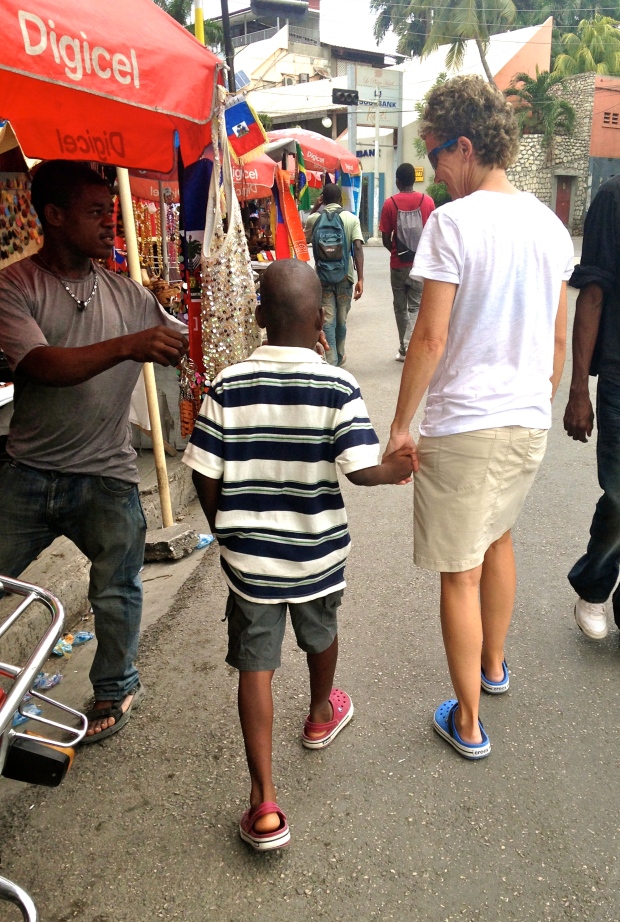 When I was just about to deposit him back into the van something caught his eye at the tent right next to us. He quickly ran over and said, “Mom, can I get this?” TWIST MY ARM..OH, OK. I GUESS.  It was a necklace with Messi’s picture on it.  The man selling it asked him, “is he your favorite?” and Vinny excitedly shook his head yes. So, of course, now I’m a big Messi fan.  He’s #10. He’s a forward and has scored 4 of the 8 Argentinan goals in the WC and assisted on another. He’s the highest paid soccer player in the world- just passed Ronaldo with his latest contract- and he plays for Barcelona during the year.  Cali will love that I shared that trivia with you (mockingly love). Here’s the necklace: 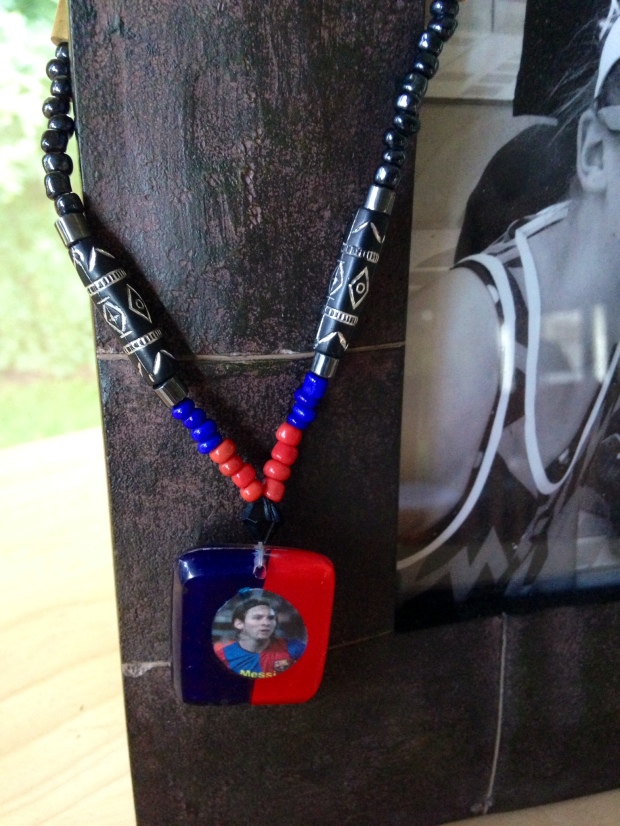 He wanted me to bring it home and keep it safe for him here. That was a cute conversation we shared on the last day. I think I understood him that he didn’t want it to get lost or broken.

We miss him and have fun sharing stories of our time with him. After we got back, I found out that our file hadn’t entered MOI like we thought it had prior to going down. That was disappointing news.  This week I’ve been trying to find out if we have now entered. Not getting answers from our lawyer. At the end of MOI Davensly will have a passport, then we can get back to the US Immigration side and move towards getting his Visa and bringing him home.  Thank you for your continued prayers.  GO ARGENTINA! GO MESSI!