Hey everyone! It’s high time for an update, huh? At least once a month since bringing Vinny home on Jan. 28, I have attempted to sit down and compose some intelligent thoughts about what life under our roof has looked and felt like for all of us. Then, I would stare at the screen finding myself unable to formulate complete thoughts and often unable to find the words to describe it all.  So, I would close that window and open up Facebook instead 🙂 I am determined to see this post through to some sort of an end!  It may be a bit random- shocker, I know.

Let’s start from the beginning- the details and miracles that God orchestrated to get us home together with the Haroldson’s are too numerous to declare.  Seriously you guys- there are so many hard stories from families that have been in the process for YEARS with no end in sight for bringing their children home. Then, the family and friends waiting for us at the airport the night we came home…wow.  I can understand how some people choose to keep that moment small for the adoptee to not be overwhelmed…but, for us it was about sharing that moment with the people who had been cheering and praying for us on the whole journey- and STILL are.  As we have reintroduced Vinny to people we’ve said many times, “he/she/they were at the airport when you came home”…so sweet.

Davinsly is a gift from God to our family.  He is bright, resilient, brave, responsible, kind, witty, caring, serious, silly, athletic, direct, honest…  a girl in his class told him, “if we were in a contest for honesty, I would nominate you.” lol.  Someone else said, “you fight off bullying.” And a common thread throughout his end of the year notes from classmates was that he is an awesome soccer player and teammate and everyone wants to be on his team at recess…boy after my own heart ❤️. My favorite note was this from a sweet girl, “we all want you on are soccer team, and we all want you as a parntner, and we all want to sit bye you. You were never very shy and you where happy to be in are class.”  His teacher told me that one of the top highlights for the class was when Vinny got there.  COME.ON. We were just happy he was going to school and not putting up a fuss about it. 😅 Then, to read all these kind words in June…another THANK YOU, LORD for your continued faithfulness.

He has endured a lot these first months as you can imagine.  He went to the dentist week 2 (no cavities! but I’m betting he has one in August at his next appt). He’s spent hours in doctor’s offices- shots, stool samples, getting evaluated, poked and prodded for this and that (I think he needs glasses- eye dr. appt needed). He’s been on liquid iron supplements daily for 2 months- disgusting taste and smell. His vitamin D level was low (darker skinned people have a harder time absorbing from sun) so he’s been on those supplements since first appt. Otherwise- he arrived well nourished and healthy.  Dr. at U of M International Clinic said he and Stanley were healthiest children she’s seen from Haiti.  He bravely endured being the new kid at school and had limited English to go with it.  (Another praise and thanks for the English he was taught in Haiti). I don’t remember one time he said he didn’t want to go to school. Whew. People are impressed at his oral language- which is coming along quickly.  But, academically it will take a few years to catch up with the writing and reading pieces. He enjoys learning and our prayer is he will be patient with himself when he doesn’t understand things and that he doesn’t lose the desire to learn in the face of discouragement.

He has experienced his first long road trip. We had a blast driving to Florida and spending a week on the beach in April. Scott and I both thought this time was hugely beneficial for all of us bonding with him and him with us. Again- many “experts” would say don’t go anywhere for the first 6 months after your child comes home. Well, the five of us leaving town for concentrated time together was awesome for all of us and Vinny did great.  And when Scott left for Florida 2 weeks in for work, mom did great. 🙂

He jumped into traveling soccer right away.  He practiced with a couple teams for 2 weeks then got moved up to the top team for his age group. His foot skills in tight spaces are more advanced due to his daily play on the concrete driveway at the orphanage.  He has improved a ton and is learning spacing, rules, teamwork and how to play on a bigger field. He had tryouts this weekend for next season (fall and summer) and we hope he stays with same team to have continuity and play with the boys who have become his friends. He was invited to go to Valleyfair this week with one of the them. He is excited. I’m grateful someone outside of our village reached out to him.

He was in his first wedding! He and his two buddies from the orphanage were all the ring bearers for our friends Breelynn and Kyle’s wedding June 26. They did a fantastic job. We all had a great time dancing at the reception- Vinny loved when people copied his moves.

Other fun “firsts”: He has experienced a couple family birthdays and parties (these situations can cause big feelings in kids from hard places)- one at a mall food court for his cousin Nicky less than a week from getting home, and at Buffalo Wild Wings for Will’s 14th party. He fit in easily, observed quietly and participated excitedly.  We did celebrate his half birthday on May 10 🙂 we had expected him to be home on Nov. 10 for his 9th bday and had already been talking up his party with him. He was thrilled with his half party. He loved sledding and winter.  He didn’t take off his coat and stocking cap until May, however. He loves pizza, plain wheat bread (used to eat lots of peanut butter) chicken wings, carrots, Subway, hotdogs, lettuce, pork chops, steak, baked potatoes, ice cream, blueberry muffins, frosted flakes, Panda Express orange chicken/white rice…and most fruits, thankfully! He does not find chocolate, broccoli or asparagus to be “tasty” and we are working on all of that.  He loves LEGOS (he wants to be a LEGO designer when he grows up). He makes really cool scenes- his latest is of a backyard pool with a sweet cabana. He loves all things Superheros and Avengers. He’s enjoyed going to movies- he’s been to Paddington, Annie, Spongebob, Inside Out, Ant-Man, Avengers, Minions..loved them all. He’s a good artist- def not a Pearcy or Nelson trait…no offense. He has a keen sense of smell just like his mama. He celebrated his first 4th of July at my sister’s cabin with all the Nelson clan… swam, tubed, 4 wheeled, fished..

He ADORES his brother and sister. And they are so patient, fun loving, and gracious to him (MOST of the time!) He loves to hang out with both of them at any time. They all enjoy each other’s company. He and Will play a lot of soccer. Outside. Inside. FIFA on Xbox. FIFA on iPads. They watch any pro games on tv. They bike a few miles to practice on a real field. We have become a soccer family. We all love watching Vinny play, too. Vinny and Cal spend lots of time “cuddling”. And taking pics and videos together. Make no mistake- they all get irritated with each other in moments, but it’s never over the top or worrisome. We are so grateful. Again. One of my favorite things is to sneak downstairs after the boys go to bed (they share a room) and listen outside their door to them chatter on about anything and everything. Melts me. Last week, they were extra rambunctious and I opened their door about 11:00 to see what was going on. Will was standing over Vinny’s head wacking him with stuffed animals. Vin was laughing hard…Will said Vinny was making fun of his animals 😂…yes, Will is entering high school.

This is getting long… I will try to wrap it up. I feel like the first few months I was in a fog and exhausted most days- mentally and emotionally- in total survival mode.  I think Scott would agree he felt the same. We kind of tip-toed around not wanting to upset the apple cart, always making sure everyone was doing ok and if they weren’t, trying to help each other process through it. We’ve had some very hard days, nights, and moments- especially early on- but with God’s grace and grace for each other we are making it. I think we’ve slowly moved past just surviving, and are slowly working our way towards thriving. Some days we make more progress than others. Everyday it feels a little more normal and like we are truly a family of 5 instead of 4+1.  I’m in awe of the heart God has given Davinsly. Vin loves Jesus. We are thankful for his first family and whomever taught him about the Lord and stories and characters of the Bible. He knows more than Cal and Will about the Bible (put that on Scott and me)!

He loves his daddy. Scott has found a great way with him. They are buddies. Vin was mad at him last week but recovered quickly and in his prayer at bedtime he said, “thank you that me and dad are friends again.” I think for Scott and me going from 2 kids to 3 has been challenging.  It was pretty easy and manageable with 2.  3 really changed the dynamics in and of itself. Even down to the amounts of dishes and food now needed to get through a day! And 3 kids who all are social and have things to do and places to be.  Thankfully, Cal has her license now and that has helped lighten the taxi load a bit.

I could go on and on. I still stand amazed that God chose us to be a part of Vinny’s story, and him a part of ours. Humbled. Blessed. Grateful. Please keep us in your prayers. The daily part of parenting a 9 year old with early childhood trauma feels hard some days…but most days are a lot like they were with Cali and Will when they were his age. Every month he trusts us more and more. Pray we love, listen, guide and teach him in the right ways. Sometimes the call of raising a black son in a white world of privilege feels overwhelming when I look too far ahead. Those are the times I need to rest in the truth that God provides us the manna we need for each day and only for the day. We know we could not do this without Him, or without the support of our friends and family! Thanks to all of you who have loved on all of us!

OH YEAH- He played hockey, too! When in Minnesota… 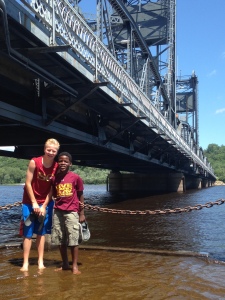